Trust Your Gut- It's Always Looking Out For You

He couldn't believe he'd been stabbed. And it was bad.

How could he have walked into this. He had known something wasn't right but he went in anyway. 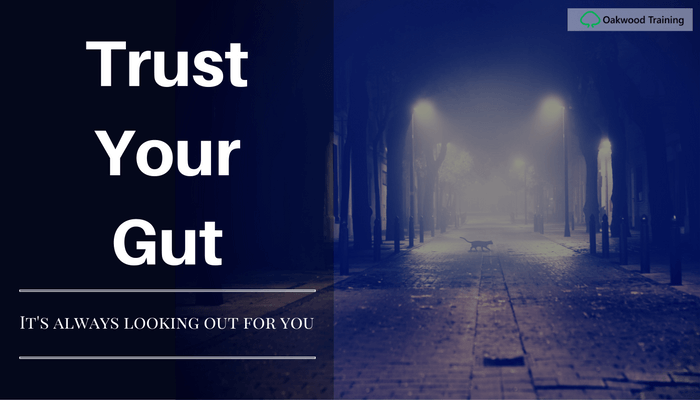 Trust Your Gut: It's always looking out for you

When I met this man a few months ago on a ﻿Lone Worker and Personal Safety course﻿ I was running, he openly shared his story with his colleagues and I, and you could have heard a pin drop as we hung on his every word.

Working for a housing association as a "Voids Officer", he wasn't used to coming into contact with people on his visits. His job was to assess the state of empty properties to find out how much work was needed before new tenants could move in.

He had loads of experience and been out on his own most of his career. No reason to have thought today would be any different.

So, with auto pilot fully in control, he grabbed his kit and left the office as normal. No checks on the property and he only filled in the basics on the board in the office to let others know where he would be.

Arriving at the property his spider senses started to tingle. Something not right about this place.

"Pull yourself together man, ﻿it's just part of the job﻿﻿﻿﻿﻿﻿﻿.﻿ One of many in the queue for today. Can't afford to fall behind so get on with it."

Walking around the premises he picked up the warning signs. He saw that there had been recent movement in the place. He saw the discarded needles and tinfoil which, from experience, told him someone had been using drugs in the place.

He saw the graffiti sprayed all over the walls and the bedding in the front room that said someone had slept there that night.

The little voice in his head was shouting at him to get out of there but he squashed it down, forcing himself on with the visit.

As he rounded the corner towards the shed in the back garden, the drug dealer lashed out, plunging a kitchen knife into his abdomen. No warning. No time to de-escalate or even speak to the guy. Just stabbed.

66 internal stitches later this man was lucky to be alive.

And that's how quickly these can things happen. One minute your fine, next minute you're not.

Your brain is an amazing thing, constantly scanning for threat on a subconscious level. The limbic brain scans for danger and starts the process of protecting you by giving you a natural boost.

We know it as "Fight or Flight" (although the phrase is somewhat flawed, more on that in another blog no doubt)

On detecting a threat your body is flooded with a load of substances; adrenaline, dopamine, endorphins and cortisol among others.They are there to give you an edge to run away from the sabre tooth tiger or fight it.

We've hunted most of our natural predators into extinction or locked them in zoos. But what about other humans? Thank goodness the process is still there.

Listen to that little voice!

By his own admission my friend made some basic errors that day. Not prioritising his personal safety being the main one.

He is back at work within the housing sector and has moved on. His pre-visit routine however has changed dramatically. He takes the time to check available databases, speak to colleagues about where he is going, record more info in his outlook calender about appointments, checks to make sure his "buddy" knows where he is and how to get hold of him, ensures he has his phone and personal safety devices charged and to hand among others.

Most importantly, he has learned to listen to that little voice that says:

"Somethings not right here, get out".

Don't try to squash that feeling when the hairs on the back of your neck stand up, or your spider sense starts to tingle. Your subconscious has picked up on something that your conscious mind is not yet aware of.

Act on what your built in threat detector is telling you. It could save you an awful lot of bother.