“There’s nothing I can do about it” 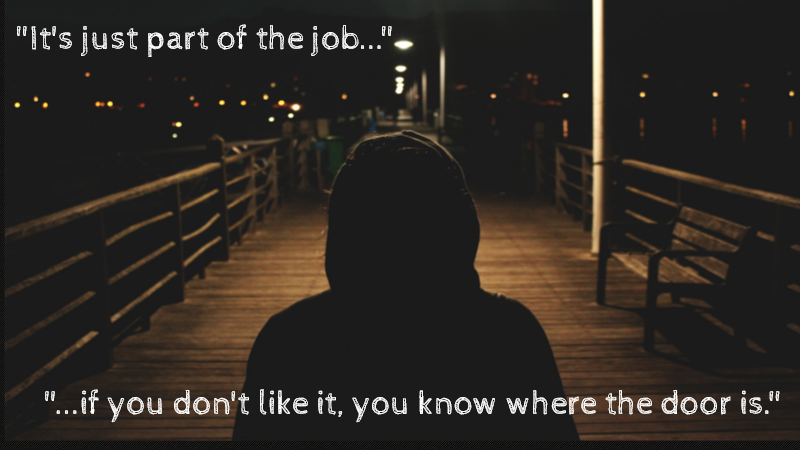 Hands up if you’ve ever been asked to do something at work that you thought was risky. You felt really unsafe doing it but thought your hands are tied and you were powerless to do anything about it.

Working within a variety of sectors over the past few years, including: housing, education, social services and probation; I have heard some amazing tales of real life incidents that you just could not make up.

Like an Asian youth worker who felt he had to complete a home visit, despite being confronted by the child’s father, an aggressive “right wing extremist” with a swastika tattooed on his forehead.

Or the nightshift worker who put up with abuse and threats while fixing a drunken tenant’s boiler because he was worried about being disciplined.

The sad reality, in my experience, is that a lot of employees are confused and worried. Some believe that putting themselves in danger is just part of the job, and if simmering hostility should ever boil over into physical violence – there’s nothing they can do about it.
They’re pretty sure the law will support them, but there is a real fear that their employer will blame them for not following the standard:

“Don’t get involved, just withdraw and call the duty manager”

Disciplinary action? P45? And let’s be honest, what good is calling a manager when you’re trapped in someone’s front room or someone’s throwing punches at your head?

Part of the problem is that employee’s just don’t know their rights.

I’m going to assume that most of us have heard of the big hitter in keeping employees safe at work: The Health and Safety at Work Act 1974.
In summary, employers have a duty to keep their employees (and others) safe whilst at work. They have to conduct assessments to identify risks to health, safety and welfare and do all that is reasonably “practicable” (yes, it is a real word and it essentially means risk vs cost) to control and reduce that risk. I’m sure I will be writing about this essential legislation in the future so I don’t want to get tangled in the weeds right now.

You’ve probably never heard of it and to be fair, neither had I until my friend Mark Dawes from the National Federation for Personal Safety shone a light!

In a nutshell… if you find yourself in circumstances of serious or imminent danger, you have the right to:

“…take appropriate steps to protect yourself and others…”

That includes the right to stop working and leave the area if they think you are in danger, and refuse to come back until the danger is gone.

If you take an “appropriate step”, you cannot be disciplined (sect 44) or dismissed (sect 100). Pretty powerful stuff.


Before I go on, employment law can be extremely complex and I would strongly advise you seek specialist legal advice for each individual circumstance. I am not an employment rights specialist and would never claim to be, but it strikes me that if a few more of us knew about this, then perhaps we would have a little more confidence in speaking up.

So, what’s an “appropriate step?”

It’s pretty vague to be honest, but the legislation gives us the following:
“…whether steps which an employee took (or proposed to take) were appropriate is to be judged by reference to all the circumstances including, in particular, his knowledge and the facilities and advice available to him at the time.”

So it would appear to be down to the employee to determine what’s dangerous and what to do about it. There are some interesting judgements considering this point, ranging from a man who walked out of the night shift after being bullied by a colleague to a chef who refused to serve half defrosted chicken (no really…look)

To my mind there seems to be some parallel between “an appropriate step” and the interpretation of “reasonable” when determining reasonable force (ie Necessary and Proportionate).

“Get out of Work Free Card!”

Hang on a minute, surely I can’t just down tools and leave? This sounds like a “get out of work Free card!” What about the service users?

Good point… of course there is a balancing act between the rights of an employee and the duty of care owed to others. Section 7 of the Health and Safety at Work Act 1974 for example, places a duty on employees to take reasonable care of themselves and of others who may be affected by their acts (what they do) or omissions (what they didn’t do but should have!)

Think of it like this, if there is a fire in a hostel, the night worker has the right (under Employment Rights Act among others) to get out of the building to escape the serious and imminent danger.

But what about the duty of care to service users? The worker can’t just leave and cross their fingers hoping for heavy rain and that everything turns out ok. While they are certainly not expected to don the caped crusader gear and run into burning buildings, going home without doing something appropriate (oh I don’t know, like calling the fire service) would probably breach Section 7. I’m not so sure that would be seen as an “appropriate” step either under Employment Rights.

What about defending yourself or others in circumstances of violence?

Picture the scene… two 11 year olds fighting on the school playground. A teacher see’s what’s happening and instinctively acts, stopping the aggressor from wrapping a hockey stick around another’s head, by grabbing the girls arm. She has clearly acted in the best interest of both parties (the main consideration in any action involving children) and no injury is caused.
Unfortunately, the teacher has breached the “no touch” policy and is disciplined.

Ridiculous, but the truth is often stranger than fiction.

Was the teacher taking an appropriate step in a situation of serious or imminent danger? I’d say so, and don’t even get me started on “no touch” policies.

A little more detail then: Who is an employee?

When it comes to Employment Law there are differences in status, so things can get fairly complex. The general approach is that if you work under an employment contract then you are an employee, BUT, it’s not that easy (see what I mean HERE).

If you “hold office” like police officers, prison officers, company directors etc then you are neither employee nor worker. Clear as mud right??

But just because you are not an “employee” doesn’t necessarily mean you’re not protected. Police officers are not “employees”, but for the purposes of Health and Safety they are to be regarded as employees (specific statutory provision Sections 51A and 52(1)(bb) HSWA 1974).

And in relation to employment rights, the Police (Health and Safety) Act 1997 says that the office of constable is to be held as employment for the purpose of Section 44 and 100 of the Employment Rights Act 1996.

It should never be accepted as part of the job

There is no denying we live in challenging economic times and there is ever increasing pressure on services to do more with less. There is inevitably going to be an impact on frontline delivery of services.

The men and women I have met over the years do the job by in large because they want to make a difference to people’s lives; Social workers; Police Officers; Teachers; Healthcare Professionals. They deserve to be kept as safe as possible in the often hazardous environments in which they work.
Putting themselves in harm’s way because they don’t feel empowered to protect themselves or others for fear of loosing their job is simply unacceptable. My concern is that staff safety is becoming a casualty of the balance sheet. The message has to get out, that while the incidents I have described may well be a RISK of the job, they should NEVER be accepted as “just part of the job”.
Share this post. People will thank you!
Share
Tweet
Share
Share
Follow