Can I carry a weapon just in case? 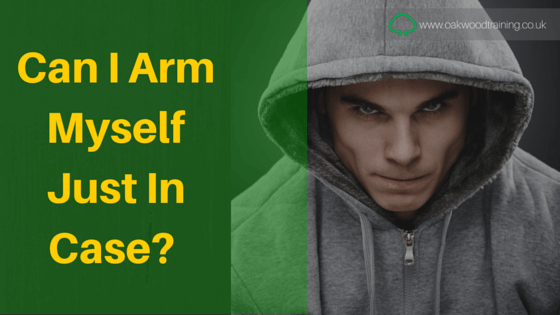 “So, I have a rounder’s bat in my car just in case. I can’t get done though cos I’ve got a ball and glove in the boot…”

Can I Arm Myself Just In Case?

I’m pretty sure that the police have heard that one before, and would ask a few more questions like: “have you just come from practice then, where do you play and how often”… It is more likely they will come to the conclusion that you are carrying the bat to use as a weapon, and that makes it an offensive weapon.

“It’s not a weapon…” you protest, “It’s a sports kit!” And that is where you are wrong. It is an offensive weapon and you’re going for a little ride. Here’s why…

So what is an “Offensive Weapon” anyway?

We can’t possess an offensive weapon in a public place without lawful authority or excuse. (Section 1 of the Prevention of Crime Act 1953)

This is where it gets interesting, and sometimes confusing. An offensive weapon is:

“any article made or adapted for use to causing injury to the person, or intended by the person having it with him for such use”

So “Offensive Weapons” can be “Made” “Adapted” or “Intended”.

“Made” weapons are things manufactured for the sole purpose of causing injury, like knuckle dusters and ninja throwing stars. Check out the full list here.

But it’s not only things on the list that might get you in hot water. Everyday items can also be classed as “offensive weapons”.

“Adapted” weapons are not manufactured to be weapons (so don’t appear on the list,) but are altered in some way to make them into weapons. e.g: a petrol bomb, (combining things you can lawfully possess into something nasty) a golf ball with nails pushed into it, a toothbrush handle melted around a razor blade, a beer bottle smashed to create sharp jagged edges etc.

“Intended” weapons are not “made” as weapons or “adapted” either, but are carried with the intention of being used as such- for example- carrying a set of keys with one protruding between my knuckles; a baseball bat on the front seat of my car in case I’m attacked. Or a book- Jason Bourne style.

It doesn’t matter what the item is… what matters is your intent. If I’m carrying it to level the playing field, it is an offensive weapon (even though I am only going to use it in self-defence).

And Context is really important too.

What may be perfectly lawful in one circumstance, may be unlawful in another. So that same carpet fitter who is allowed to carry his tools and knives while he is working would be in trouble if he took his Stanley blade to the pub to watch the football with the lads. He doesn’t have a lawful reason to carry it anymore because he’s not at work.

But what if I use something I am already in lawful possession of? Is that ok?

So, I’m walking back to my car after football practice, texting my other half that I’m on my way and carrying my boots. I see a group of youths hanging around my car. I ask them if everythings ok when one of them suddenly grabs my phone. Two of the other lads come to help him out, because I’m not letting go, and start grabbing and punching me. Completely surrounded and with punches raining in from all angles, I swing my boots as hard as I can, hitting one of the lads in the face with the studs.

But what about the “weapon” I used.. Am I in trouble for carrying an offensive weapon?

Let’s have a look…

Football boots don’t appear on the list of made weapons, so they aren’t “offensive weapons” per se. They are not “made”

I also didn’t spend the previous evening sharpening the studs up to a fine point. The trend doesn’t seem as popular here as it was during my high school rugby days in South Africa! So they are not “adapted”.

But was I carrying the boots “intending” to use them as a weapon? No. I had them for their everyday purpose, so they are not “intended” weapons either.

So I am not carrying an offensive weapon.

Does this mean that as soon as I take something with me to use as a weapon then I’m guilty?

Although the law on carrying weapons is pretty clear, just because I may break offensive weapon laws doesn’t necessarily mean I will be found guilty. I may be able to argue that I had possession of it for the lawful purpose of defending myself or others from imminent danger.

The key is “imminent”.

The Court of Appeal clarified that in exceptional circumstances people can arm themselves even if by doing so they break other laws, if there is an imminent threat and it is reasonable to do so.  The court also stressed however, that once the imminent danger is gone– so is the lawful excuse for carrying the item. I looked at this in my previous blog.

To wrap this up then…

The law does not recognise the concept of a “defensive” weapon. And although there may be exceptional cases where we are allowed to arm ourselves in circumstances of imminent danger, they are the exception rather than the norm.

Moral of the story: we cannot walk around tooled up just in case.

Previous Post Can I Arm Myself If Someone Breaks In? Next Post What is Mental Health First Aid?