Can I Arm Myself If Someone Breaks In?

So, everyone’s worst nightmare…It’s the middle of the night and you are woken by the sound of smashing glass downstairs. 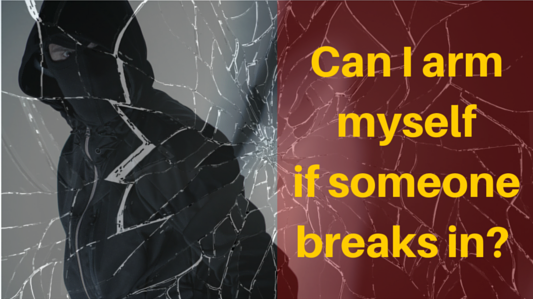 Can I Arm Myself If Someone Breaks In?

Your kids are asleep and your other half is away. You’re scared, and have no idea who or what is downstairs. You slowly get out of bed, grab the lamp stand from your beside table and creep your way out onto the landing. You shout that you’re calling the police when from out of the darkness a large figure in black pushes into you. In shear panic you swing the lamp stand knocking the figure down the stairs.

In short:- Yes. As long as you had an honestly held belief that you or another were in imminent danger. Read my blog on “reasonable force” here. It is not in the public interest to prosecute people defending themselves in their own home, provided their use of force was “not grossly disproportionate.”

In 2012 Andy and Tracey Ferrie were woken by the sound of someone smashing their way into their isolated farmhouse, near Melton Mowbray, Leicestershire. Mrs Ferrie handed a shotgun, which they were in lawful possession of, to Mr Ferrie and they went downstairs.

They found at least three masked intruders in their kitchen. One of the burglars reached into the drawer and pulled out a kitchen knife. Mr Ferrie pulled the trigger and shot the knife wielding burglar in the face, and another in the hand.

The burglars were arrested and sent to court, the Ferries, although arrested and questioned, were released without charge (so didn’t even have to go to court to explain their actions.)

One of the burglars tried to argue for a lesser sentence because he’d been shot. Sentencing, Judge Pert said:

“Being shot is not mitigation….If you burgle a house in the country, where the householder owns and legally possesses a shotgun, that’s the chance you take.You can’t come to this court and ask for a lighter sentence on the grounds of it.”

“Just in case” doesn’t cut it…

But what if I keep a kitchen knife next to the bed, just in case someone breaks in?

Technically- No. If I know about a specific threat then the law says I don’t have to rely on just calling the police. I could arm myself protection. Like the shopkeeper who made petrol bombs to protect himself from rioters…no really: read more about it here.

However, once that very specific threat is gone- so are the lawful grounds for keeping the weapon. Setting booby traps- like in the movie where the blonde kid is left at home over Christmas- is a no no; as is keeping a pump action shot gun under your pillow.

We all have the right to use reasonable force to defend ourselves, but going about our business tooled up just in case is generally not allowed. There has to be some pretty extreme circumstances rather than it just being what you do on a daily basis.