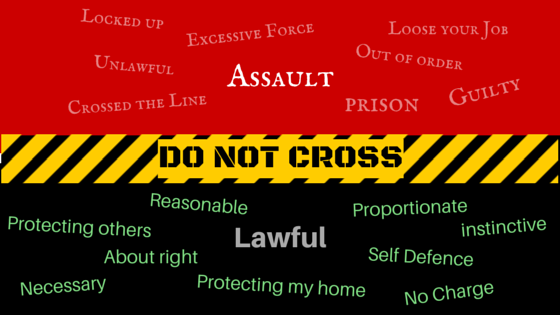 “Touch me and I’ll have your job!” and “Get your hands off me, that’s assault! I know my rights!”

These little statements or variations of them are trotted out almost routinely and unfortunately seem to have a lot of people running scared. Primarily because a little part of us thinks, what if they’re right? Could I loose my job…or worse? After all, there’s no smoke without fire.

On a recent course for example, a hostel worker working with violent offenders told me that under no circumstances were they allowed to touch the residents, even if being physically attacked by them. His manager said it breached policy and it is against the law to “assault” vulnerable service users.

I have also heard on numerous occasions that using force on a child is assault because the laws of self defence and reasonable force do not apply on school grounds or education establishments, social care settings or children homes.

This is a shocking but all too prevalent position- and it’s NONSENSE. What kind of legal system would expect you to stand there and be a victim of a violent assault because the attacker is vulnerable or at school?

Using “Reasonable Force” in the following circumstances is lawful, therefore not assault:
• self-defence or defence of another
• defending property
• preventing Crime
• making or assisting in a lawful arrest (there’s more to this one!)

It’s pretty clear: if you are using force for a legal purpose and it is “reasonable” then it is not assault.

So what is “Assault”?

Believe it or not there is no legal definition. In our “Get your Hands off me” type scenarios, we are talking about a low level physical confrontation with minor injury if any, so “Common Assault”.

Common Assault is when a person either assaults another person or commits a battery. So, there are two aspects to consider:
1. “Assault:Intentionally or recklessly causing another to “apprehend the immediate infliction of unlawful force”.

2. “Battery”: The physical Act that most people would understand to be an assault, eg hitting someone or grabbing hold of them, or coming into physical contact either intentionally or recklessly.
If you threaten or attack someone on purpose knowing it was wrong, that’s “Intentional”.
If you didn’t mean to but knew your actions or behaviour may have caused injury or make someone think they would be assaulted, that’s “Reckless”.

As you can see, in order for it to be Common Assault, the action must be UNLAWFUL. So if you are acting for a lawful purpose using reasonable force, it is not assault.

Threats can also be an assault

For example aiming an imitation gun at someone shouting that you’re going to kill them IS an assault even though it’s an imitation gun and not capable of causing any injury whatsoever. The intended victim doesn’t know that and would be forgiven for thinking they are about to be shot (therefore apprehend immediate unlawful violence).

“If the teacher wasn’t here I would batter you”. Not very nice but it’s a hypothetical threat, therefore not technically an assault because there is a condition (the teacher not being there). Because the teacher is present, there is no apprehension of immediate and unlawful violence.
“Give me that or I’ll break your nose” however, definitely an assault (and probably robbery). It’s not hypothetical, its “do this or else” and it’s not very neighbourly now is it.

Is it lawful to use force against an attacker who is under age or vulnerable/lacks capacity?

Technically, if the “aggressor” lacks capacity or is under the age of criminal responsibility (10 years) they can’t be guilty of a crime. Although that may rule out using force to prevent a crime under Section 3 Criminal Law Act 1967, the Common Law right to Self Defence still applies (clarified by Section 76 Criminal Justice and Immigration Act 2008).

A real world example of this made the headlines in 1999, when former Beatles guitarist George Harrison was attacked in his home. The intruder, a man called Abram was armed with a knife and believed God had sent him to kill Harrison, as he was a sorcerer and a devil. Read more about this:
http://ultimateclassicrock.com/george-harrison-attacked/?trackback=tsmclip).

Will I be investigated?

The reality is the nothing you read on the internet or learn on a course will prevent an investigation.
An investigation may mean suspension from work or being moved to a different role in line with internal policies. Investigations by the police into accusations of wrong doing are usually conducted by way of an interview under caution, whether voluntarily or at a police station following arrest if deemed necessary.

In closing, the fear of being prosecuted, sued or loosing a job has people very worried. So much so that some have openly told me that they will wait to be assaulted before taking action, so they can show the courts/investigators why they have used physical force.

Personally, I would rather argue my case in the box, than be buried in one.

Do You Like What We’ve Done With The Place?